Catastrophic Rupture: A Memoir of Healing

Catastrophic Rupture: A Memoir of Healing by K. Jane Lee 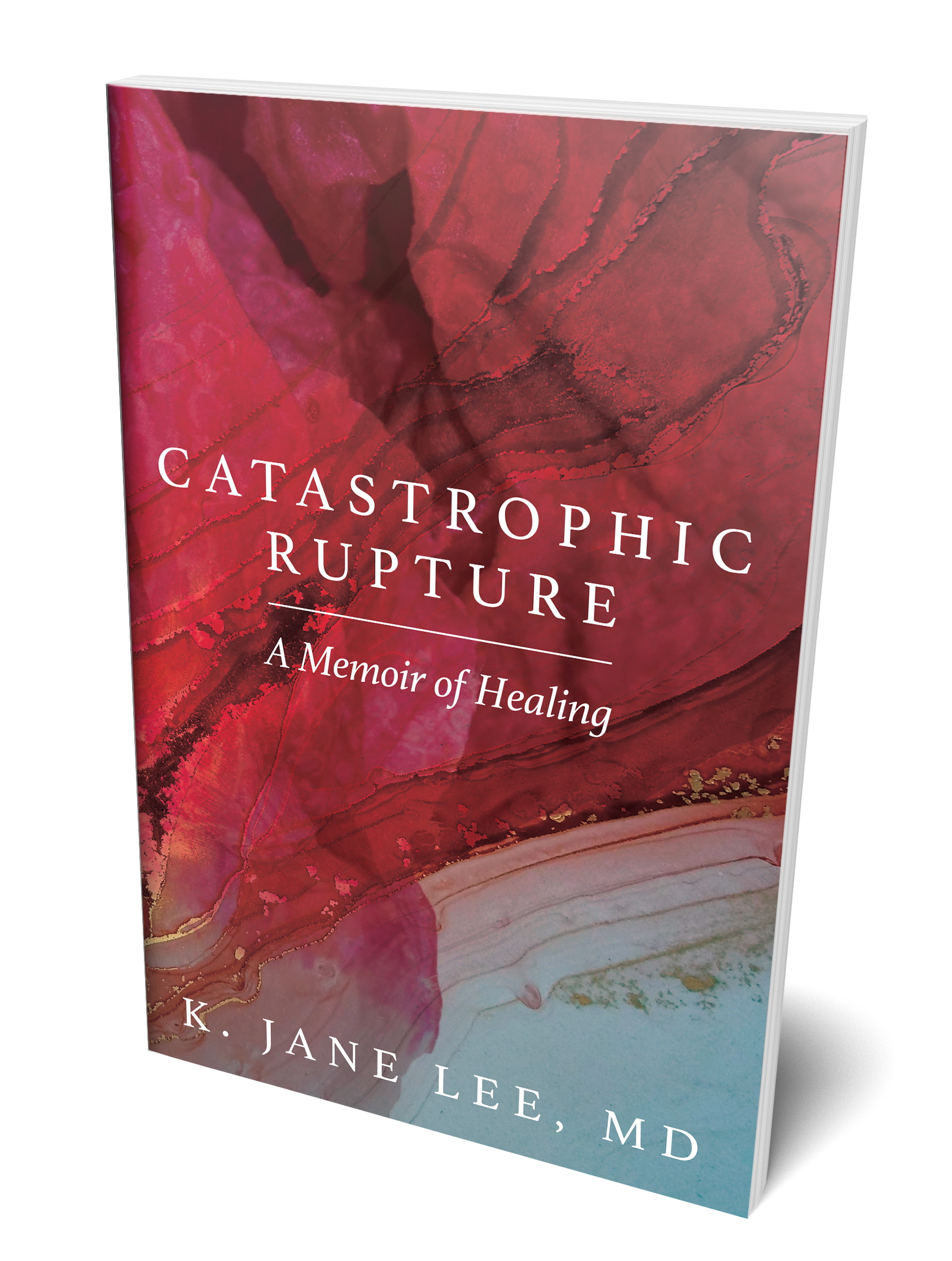 Pediatrics enjoys a reputation as a “happy specialty” with kind providers who wear cartoon character clothing, attach toys to stethoscopes, and give stickers to their patients.   Practices brim with healthy children who, when ill, recover quickly and completely.  Pediatricians love typical growth and development, and their joy is palpable when a child shakes a rattle, blows a raspberry, or toddles their first steps.

Jane Lee, MD, candidly and courageously enters this vacuum with Catastrophic Rupture: A Memoir of Healing.  A bioethics and critical care trained pediatrician, Dr. Lee cared for many children with neurodevelopmental disabilities before having her own when her uterus ruptured during the birth of her second child, Josephine.  As the prospect of a child with a lifelong disability sinks in, Dr. Lee struggles to bond with her daughter.  But through time, lived experience, and much reflection, Dr. Lee comes to value Josephine for the person she is, not her abilities.  As she traverses her personal journey, Dr. Lee evolves as a physician and begins to see the pervasive biases against children with neurodevelopmental disabilities shared by so many physicians, including, candidly, herself.

At its core, Dr. Lee’s memoir is a story about overcoming ableism in the quest to see and love her daughter fully.  And in doing so, she shows why and how we in health care must begin to dismantle ours. Reflecting on an interaction she had with a family before Josephine’s birth, Dr. Lee encapsulates the attitudes commonly held within the profession:

My years of training were full of patients and parents like this, children whose severe neurologic disabilities allowed them only the most basic interaction with the world, parents so devoted that they would do anything to keep them going. The questions nagged me: Do those parents really understand what is going on with their child, that there is no hope for improvement? Do they really believe that their child is capable of the thoughts and emotions that they attribute to them, or is that just a way to cope with spending day after day caring for a child who can’t respond? Why do they keep subjecting their child to medical treatments that only serve to prolong this tortured existence?

After Josephine’s difficult birth, Dr. Lee struggles with a sentiment — common among pediatricians and many others — that it is preferable for a child to die than survive with a severe disability.  Reflecting on a conversation with the father of a dying neonate in a NICU waiting room, Dr. Lee writes:

My expression was one of sympathy, but what I really felt was envy. I had a sudden secret desire to trade places with him, imagining that the experience of pure grief would be preferable to being consumed by shame and guilt, by gnawing uncertainty about the severity of Josephine’s disabilities, by daily dashing of hopes as she remained unaware, and by dread of a lifetime of fruitless struggle caring for a child who might never really be a person. This father would mourn his child while life gradually moved on. But for us, there was no moving on from what lay through those NICU doors. Because Josephine—floppy, gurgling, and unresponsive—would come home.

But once home, Josephine develops more responsiveness and skills, and Dr. Lee begins to feel more hopeful, and by extension, more connected to Josephine. She then devotes herself to advocating for Josephine’s progress in therapy, school, and social interactions.  The reader shares Dr. Lee’s moments of joy when Josephine makes progress and despair when she doesn’t.    Ultimately, the setbacks are more instructive, as Dr. Lee’s pain leads to the realization that she must decouple her love of Josephine from her abilities:

I realized that I was still all wrong about love and value and disability and personhood. Although my love for Josephine was now deep and well-established, it was not quite unconditional. My love and my perception of her value as a person were still erroneously bound to her abilities. I was so hung up on what she could or could not do, that I had confused it with who she was. Once I recognized this, I could then see why any small thing, bad or good, had such a profound effect on me. In my distorted view, each occurrence was not just an event in Josephine’s life, it was Josephine’s life—her present personhood and her future self. I began to see that the tangible things that I had been wishing for were really just means to an end. My hopes for functional gains in motor skills such as using a gait trainer or a power wheelchair, communication skills such as using her eye-gaze device, and social skills such as enjoying typical family outings or making typical friends were all merely building blocks toward my real dream for her. I realized my real hopes for Josephine are that she feels loved—deeply, fiercely loved, that she feels valued and respected and known, that she feels fulfillment and contentment with her life. I want Josephine to be at peace with who she is. I realized that none of those things are dependent on specific abilities or disabilities. They are dependent on who she is as a person, and how we treat her as a person. And when that thought arrived, I found my peace.

Dr. Lee’s powerful personal journey occurs alongside her instructive professional one.  While she raises Josephine, she simultaneously continues to practice medicine and becomes clear-eyed to the profession’s attitudes toward children with neurodevelopmental disabilities:

My conflicted mindset continued at work as well. I was still very envious of some of the patients and families I cared for, specifically those with medical issues that were not neurological in nature. At the same time, I was developing deeper empathy for those families whose children had neurological impairment. I began to recognize the bias that is present in medicine, the devaluing of these children. I knew that I, too, had been guilty of this— questioning why the parents of these children continued to desire aggressive medical care, but never questioning why other parents whose children had non-neurologic issues would do the same

The contrast between how I now viewed children with neurodevelopmental disabilities and how some of my colleagues saw them—how I had previously seen them—became more and more apparent. The pervasive belief appeared to be that these children’s lives were already so devastatingly impaired that nothing we could offer would make a difference, that it was pointless to continue the seemingly never-ending cycle of medical care. An outside observer would never suspect this viewpoint based on the medical care that was provided; it was appropriate and delivered in a kind manner. In private, however, I heard— and for the first time really noticed—the flippant, cynical remarks. These comments weren’t made in a malicious manner. I truly believe my colleagues didn’t dislike these children or wish them ill. Rather, it was as if these patients were just not recognized as people; they were seen as something less than that.  My colleagues couldn’t know how disrespectful they were being because they didn’t see in front of them a person who could be disrespected. I bristled inside whenever I heard these comments, but I didn’t speak up. The attitude was so widespread and deeply ingrained that I didn’t think I had the words to change it. I didn’t want to start lecturing and succeed only in earning a reputation as oversensitive and judgmental. So I stayed silent.

Ultimately, Dr. Lee did not stay silent.  She found the words, in this memoir, with the power to change hearts and minds.  Catastrophic Rupture: A Memoir of Healing should be required reading for all who provide health care to children, ideally, while they are in training.  Families and caregivers, particularly those struggling with accepting their children’s disabilities, would also benefit from Dr. Lee’s insights.   We may not be able to walk in Dr. Lee’s shoes, but by reading her book, we may gain some of the understanding required to evolve in a similar direction.

Catastrophic Rupture: A Memoir of Healing is available from Ten|16 Press and Amazon.com.  All author profits will be donated to the Complex Care Program at Children’s Hospital Wisconsin and the Medical Humanities Program at the Medical College of Wisconsin.

About the Author: Kristie Malik